There’s a reason why there’s an “and” between Jammu and Kashmir. Being the northernmost state of India, this state shares two international borders with Pakistan and China. Kashmir is fondly known as the “Switzerland” of India. This is probably why people have been fighting over it for so long.

The same, however, doesn’t apply to Jammu, the peaceful and less controversial winter capital of Kashmir. This region lies in the upper folds of the Himalayan Mountains. Jammu lies in the Southernmost valley, Srinagar in the middle and Ladakh, a cold desert further to the North. Needless to say, all three are very different from each other. I’ve been to Jammu about six times and to Srinagar, the summer capital about twice, making this my favorite state in India. The difference between the two is apparent in all fields of life, culture and my favorite distinction, food.

Millions of Hindu pilgrims visit Jammu for one reason, to go to Katra, 45 kms from Jammu. In Katra, the difficult journey to one of the most sacred Hindu pilgrimages begins. 7 kms above the ground, on a mountain, is the shrine of the Hindu Goddess, Vaishno Devi. It is considered extremely auspicious to make this journey by foot, chanting the Goddess’ name in verses. Those unable to do it on foot rely on mules, palanquins and the recently begun Helicopter service, paired with a helipad up on the mountain.

Being located near the Kashmir valley, Jammu is blessed with scenic mountains and rich ecology, both common to Kashmir in general. But that’s where the similarities end.

Jammu itself is called “The city of temples”. It is mentioned in old Hindu folklore. In fact, influences from Punjab and other parts of North India are unmistakable, hence making it predominantly like any North Indian city. The indigenous people of this city are traditionally called Dogras. The majority of them are Hindu. They are not to be mistaken with the other Hindu community, the Kashmiri Pundits, who are from the Kashmir Valley, further North from here.

The main difference between Jammu and the rest of the Kashmir valley is what they eat. If Kashmir is known as a meat eater’s heaven, the guy who said it has certainly never been to Jammu.

The majority of people in Jammu are mostly Hindu. This means being vegetarian is quite common here, unlike in Srinagar. The food here is exactly what you would find anywhere in North India. Jammu is very close to Punjab, the mecca of North Indian vegetarian cuisine. Its no surprise then, that dishes like rajmah are associated with Kashmiri cuisine. Calling rajmah “razmah” really doesn’t make it Kashmiri. This is Punjabi food with slight or no Kashmiri influences. The millions of pilgrims who visit are very particular about what they eat when they come to Jammu. Being religious, they sometimes need to make sure what they eat doesn’t contain things that they don’t want to eat. This is why, in many major cities, one comes across a Vaishno dhaba.

These establishments are derived from the Pilgrimage route to the main shrine, where even thinking about non vegetarian food can be a sin.

A Vaishno Dhaba is just like any dhaba. Except that its 100% vegetarian. No exceptions here.

These dhabas usually serve home made vegetarian food, vegetarian snacks and vegetarian drinks. No egg, no alcohol, no garlic. Some have taken a step further and introduced elements of other cuisines. This is how vegetarian food becomes interesting. Experiments such as palak paneer momo and kathi Kebab (where a kebab is made with soya granules) are actually quite good, as are Indianised vegetarian Chinese dishes like Veg Manchurian.

Vegetarian street food is also popular. Ash-roasted sweet potatoes are used in a truly unique chaat, resulting in a wonderful combination. Pomegranate seeds or anardana is used to make digestive powders known as churan which tastes rather unique. A visit to Labh Singh’s little shop in Dogri Bazaar is a walk down memory lane, this is the kind of shop children all over India from my generation grew up visiting. He is known for a special chutney made by infusing churan and tamarind. This was, by far, my most memorable memory in Jammu. For now, Kashmiri food could wait. Jammu isn’t the place for it. That doesn’t mean its not special. As mentioned earlier, I have been coming to this city since I was 13. Little has changed since. Yes, the occassional mall or shopping plaza here and there. But Labh Singh’s shop has been the same, selling the same things since then. This place reminds me of a better time, when “smoking” a sweet cigarette made me happier than smoking a real one, cottage potato chips tasted better than the ones you find in bags full of air and life just seemed much less complicated. Shops like this are rare now. The products they sell are now considered priceless. Jammu, though nothing like the real Kashmir has lots to offer. To me, it serves up nostalgia, lots of it.

Also, just because I feel like it, here’s the recipe for Sweet Cigarettes. You can call it whatever you want.

You need to be very quick to make this at home. It takes a few attempts to nail perfectly.

Mix icing sugar with heated corn syrup, to form a semi solid sugar dough. Add mint flavouring.
This dough will dry out if you leave it out to cool for too long, so you need to roll them into cylinders while they’re still pliable. At this point, roll them into resembling cigarettes.
Leave them out on a tray, lined with butter paper.
Once solidified, dip the tips in colour. 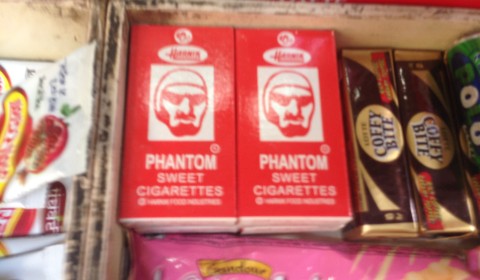