Skip to content
HomeMenuMenuThe Difference Between “Hot” and “Spicy”

Used rather interchangeably, many might think they are different. However, the two are actually the same thing. At least, as far as the science behind it is concerned. Here’s how:

1. Heat, or piquancy, is the sensation felt when we eat something that causes our palate to burn. This burning sensation numbs the palate. Over time, if the palate experiences this heat constantly, it is said to be less sensitive or underdeveloped. Hence, it cannot appreciate mild subtle flavours. However, If a person’s palate is sensitive to this heat, it may result in perspiration, near death experiences and general discomfort.

How can heat be measured?

The Scoville scale measures degrees of heat present in the most common “hot” ingredient: Chilli peppers. 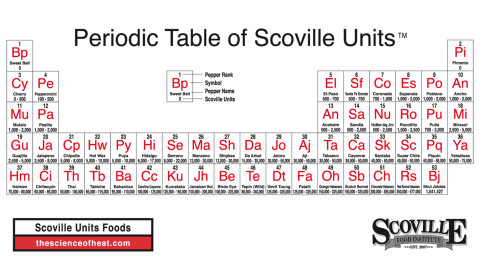 India is the world’s largest producer, consumer and exporter of chili peppers.  Indian food is notorious for being hot. Till very recently, the bhoot jholokia (ghost chilly), found in Nagaland was considered to be hottest in the world (it’s now the Trinidad Scorpion chili). The relationship between eating chili and the weather is quite apparent. Chilies cause perspiration, which is essential to cool the body in hot and humid conditions. This is why Indian food and heat go hand in hand.

2. Spice:  This is when things aren’t quite as straight forward. A peppercorn imparts heat and smells distinctively “peppery”. A cinnamon has sweet aftertastes but smells uniquely “cinnamoney”. Saffron has no apparent taste but imparts a heavenly aroma. Clove, bay leaf and cardamom: warm and uniquely intense. Others such as nutmeg, mace, bay leaf too have their own taste and aroma. Interestingly, the versatile all-spice (jerk spice), found in the Caribbean islands has undertones of various different spices. It is agreed that these ingredients are by and large savory. Hence, spicy.

What about vanilla? isn’t that a spice too? It has the distinct scent of vanilla but lacks any heat whatsoever. Very few cuisines use vanilla as a savory ingredient as well.

How is it still classified as a spice?

How does one articulately express the sharp sensation felt when biting into a chili? It feels hot, but “heat” is not officially a recognized taste. Western and Ayurvedic sciences do not mention any such taste when understanding the human palate. You could say heat is felt when something has no taste, because your tongue goes numb, thinking it is literally on fire.

“Spicy” cannot be used as well. If it could, we would say “vanilla is spicy”. Doesn’t sound appropriate, right?

If noticed, a pattern emerges in this spice-heat dilemma.

Have you tried eating an onion with your nose held shut? It tastes sweet, almost like an apple kept in a fridge for too long.

When an ingredient has a pleasant smell but no apparent savoury or sweet taste, it is classified as fragrant. Vanilla and saffron are fragrant, delicate spices.

However, when we eat things that have a sharp, nasal, overpowering and unique aroma, the taste associated to it is classified as pungent.

This sharp, overpowering, nasal taste is unique to both chili and spices. Pungency also has degrees. Herbs, in general are pungent as well. Their only purpose in a dish is to impart a unique characteristic scent. Mustard, wasabi and horseradish have more pungency and less heat.

When we eat chili, the chemical known as capsaicin activates nerve endings called V1 receptors in the mouth (your mouth’s very own anti-inflammatary force). But when capsaicin levels are brought down (by cooking or pickling), the taste changes to slightly peppery or mildly acidic. A fresh chili is a vegetable, not a spice. When chilies are dried, it may be classified as a spice as each chilly has a unique flavour and colour.

Pungency is what the Scoville meter rates, not heat. These chilies have very high capsaicin levels but when treated with respect, their flavours are unmistakable. This is why Indian food is so multi-dimensional. It is one of the few cuisines in the world that find peace after combing strong capsaicin rich chilies and bold and intensely flavoured spices. Spices, colour and flavour are the three best adjectives one could associate with Indian cuisine. This is also why the average Indian palate is usually like the eternal crisis-hardened fire-fighting hero.