Pushkar is a tiny temple town 20 minutes from the city of Ajmer, which is 3 hours by bus from Jaipur. Ajmer attracts mainly those who want to visit the holy shrine of Dargah Sharif. People also visit Ajmer just to go to Pushkar, which is home to the only Brahma temple in India.

I spent two days there and, prior to my visit, I had planned on describing Pushkar and whatever food it has only very briefly. It is after all a remote little town in the middle of nowhere. I was short of words by the time I left. Let me make it easy for you with this monologue, courtesy of a Pushkar resident. Also, it involves some cross questioning.

This is my interpretation of a long conversation I had with an individual I had met here. I’ve kept the identity of this person secret upon request. For the sake of assumption, “I” am this person.

“I’ve been living in Pushkar for the last ten years. It doesn’t matter what my name is, it doesn’t matter where I’m from and what religion I follow. That’s the case with all of us here. Isrealis, Americans, British, Germans, Russians, Chinese, Spanish and people from all parts of the world.  We all live in perfect harmony. People have been coming to Pushkar for the last 30 years. It’s a well known fact that people come here because of the obvious hippie culture, like in other places like Goa, Kasol, Rishikesh, Hampi, and others. Some people just come here to have fun, on a mini-vacation. It’s inexpensive and everything we want is available. The locals are very friendly and we depend on each other and we co-exist peacefully.

Pushkar is a city of religious significance as well, with the world’s only Brahma temple on the banks of its holy lake. The lake is surrounded by the Aravali hills that make for a very impressive view. The rules state that the town is strictly vegetarian and consumption of alcohol is illegal. Indian visa norms disable us from permanently settling here, something we would very much like to do. We travel back to our countries and again visit after renewing our visa. Whilst here, work is important. We earn enough to live an easy, comfortable life, working at yoga ashrams, temples, local hotels and restaurants; some teach locals while some sell art, and so on.

Those who come on holiday are usually young, mostly Israeli. This is because they get a year of free time before university and after mandatory military training. It’s perfect for them because it’s not too far and although getting here is challenging, the place feels just like home. Only more peaceful. Many people have taken to Hindu practices and all kinds of local elements understand them and assimilate better, even learning instruments such like the sitar and tabla. Local Pushkar residents have seen foreigners come and go. They’ve done everything in their power to help us, and we in turn generate business for them. Shops here sell everything we need and do their best to keep up with the times as far as possible. The variety of imported confectionery is as mind-blowing as it is mysterious (Nutella!). Many Indians visit Pushkar in groups, seeking offbeat experiences, and seem to find the apparent “bohemian” lifestyle quite fascinating. We try our best not to mingle with them and they keep to themselves as well. Out of all the places in this country, Pushkar is the only place which still remains comparatively secluded. We brave Indian food, heat, cows and poverty just to stay here and lead a happy life. We have no interest in modern India. Pushkar is home for us now, we live a happy life, and the town, charming as it is, has embraced us with open arms.”

“I run a local restaurant. Although we aren’t professional chefs or restaurateurs, we serve world cuisine, like almost all restaurants in Pushkar. But we specialize in Israeli food. Our ingredients are all grown in our garden or found locally. Local vendors supply us with ingredients hard to come by, especially the ones we need to import (like tahina, feta cheese and Nutella). Our menu is simple and vegetarian. We don’t like being rushed because we believe good food requires time and patience, of both the cook and the eater. The absence of alcohol ensures that no one misbehaves. Our prices are low and profits aren’t much. We don’t usually serve Indian food unless we’ve learnt what it’s like. Our food, along with kind served in most local restaurants, is prepared to suit the non-Indian palate. Which is why our food doesn’t appeal to a lot of Indians who come here and insist it’s too bland. This is true, because Indians are used to the strong, sharp flavours of spices and salt. We aren’t.

Food is easily available in this town, and restaurants have learnt a range of cuisines ranging from Spanish to Italian to “Chinese”, so everyone has a choice.

“What’s so special about the food here? Seems like a vegetarian version of Pahadganj, a notorious hippie haven in Delhi. Plus, What is a German bakery?”

As I mentioned, food here is prepared for the non-Indian palate. Ingredients are fresh and dishes are simple and wholesome. Unlike restaurants at Pahadganj, profit is not important to us. Also, Pahadganj is considered “shady” and crooked. Pushkar is, at least in theory, the opposite. This food isn’t meant to impress. It’s the only food we can eat because we aren’t programmed to eat Indian food.

No one’s sure how this name was coined. They, however, specialize in a number of very creative desserts using limited ingredients and lacking professional techniques. Some have very intriguing names. These desserts are found all over India in places where foreigners usually visit. They involve very simple ingredients and require only assembly work. Using things like Nutella, peanut butter, chocolate sauce and muesli.

Here are the names of some desserts you may have eaten or heard about.

> “Hello to the queen”, Parle-G biscuit base + banana + chocolate + ice cream
> “Hello to the king”, the same thing with desiccated coconut
> Pancakes smothered in peanut butter/ melted mars bars/ chocolate sauce/ Nutella
> Milk blended with fruits and muesli
> A variety of very basic cheesecakes
> Banofee pie or something along those lines
> Chocolate ball, with or without the “secret” ingredient
> Banana bread, Basically banana cakes baked in a bread loaf mould and served like slices of bread
> Banana bread with chocolate chips, self explanatory
> Simple chocolate brownies
> Simple chocolate brownies with “secret” ingredients
> Pushkar Israeli food, probably the most authentic Israeli food in India, made by Israelis for Israelis. It may seem boring but actually tastes quite good, plus it’s good for you
> Hummous, less salty, chunkier than what you get normally
> Labneh, hung curd + salt+ Garlic
> Shakshuka, Scrambled egg + tomato paste
> Malawach, something like shallow fried pita bread, with or without toppings, like a pizza. Thinner.
> Ziwa, malawach roll, like a croissant
> Fatut, malkwach cut up and seared with toppings as desired. Very Creative.
> Sakhleb, thick custardy drink with cinnamon, coconut and dried fruits
> Bagshu cake, biscuit base + caramel + chocolate (No idea why its called Baghshu, though I’ve heard of a Baghshu temple near Kasol and that’s about it)
> Matbucha, spicy Israeli tomato paste

Pushkar, in short, has something for everyone. It offers a life that is foreign to even us Indians. Unlike other places, time is slow and people live laid back lifestyles. For a foreigner, it proves that old saying correct. India is a land of many contradictions. Pushkar is somewhere up on that list. 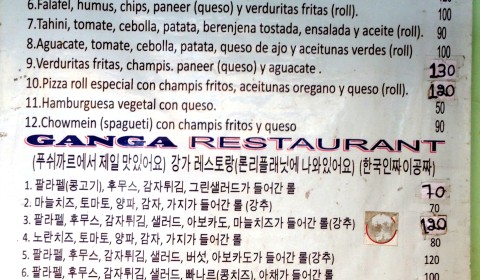