Dehradun has a habit of producing excellence. I think it’s something of a tradition here. It has some of the best educational institutions and the most renowned army academy in the country.
They’re as prominent as the mountains which form the backdrop. The city is located on the foothills of the Himalayan Mountains. Getting here from Delhi involves a pleasant yet bumpy- at-times overnight bus journey. I arrived earlier enough to watch the sun rise over the majestic mountains. Dehradun is a familiar place. I’ve been here during summer vacations when I was in school. Keeping Dehradun as our base, we would visit more interesting places such as Rishikesh, Haridwar and Mussourie, all a few hours away. Very recently, Dehradun became the capital of the new state “Uttarakhand”, carved out of northwestern state of Uttar Pradesh.
Uttarakhand is home to The Garwalis from the Garwal region and the Kumaonis from the Kumaon region. Although similar in many ways,they are both distinct north Indian mountain folk collectively known as Paharis. (People residing from/in the mountains)
Considering the name, their lifestyles are defined by these very mountains. It’s no surprise that life here doesn’t get easy. These majestic scenes don’t make life easier, just worthwhile.
People here work hard and lead simple lives. Hard work, dedication to tradition and family shape their lives. From mountains, streams to the many rivers, these people are thankful for all these blessings and live honest hard working lives.
These natural blessings also ensure one thing:
Visitors.
Visitors are of many kinds. We’re all familiar with tourists, backpackers and pilgrims who visit these areas. The many lodging options and travel packages make sure everyone goes back with a piece of Himalayan magic.
In Indian culture, a guest is treated like a god or at least like royalty. This makes india famous for its hospitality. Indian culture also preaches acceptance and tolerance. Both are qualities which shape everything we see around us, including the food we eat.
To understand this theory of acceptance, I decided to learn more about one peculiar “visitor” dish. Possibly one of the most popular street foods in India, cheap hawkers usually sell these little dumplings at arcades full of people. Unlike their place of origin, one finds many such arcades here.
The momo has captured our imagination and we have accepted this with steamers, cottage cheese variations and some of the hottest accompaniments imaginable.
Momos are originally from Tibet. Tibet, situated where it is, endures spells of some really harsh weather conditions. The people there, just like the Pahari people rely on tremendous vitality and resilience. Food is basic and consists of mainly rich proteins, carbohydrates and milk. Momo was initially part of a complete dish which also included a stock, Thukpa. Together they were served as part of a meal. The dumpling is anything but complex. A simple flour dough is rolled into sheets, cut and filled with a seasoned protein or desired filling. These are then steamed. A similar dish, tingmo, is essentially a larger filling-less dumpling, steamed and eaten like bread.
The momo then travelled from Tibet to Nepal. Once there, the momo got an uncharacteristic makeover. Although the recipe stayed the same, fillings were changed to suit local taste. Thukpa, the stock was done away with. To make the dumplings taste good individually, ajinimoto seasoning was added to the dough, just incase salt failed to do its job. After steaming, it was served alongside a hot red chilly concoction. The people of Nepal found a new craze.
Naturally, India couldn’t be too far away now could it?
I cannot point out when exactly momos made it big in India. Till a few years ago, I myself thought they were of Indian origin, perhaps from Darjeeling. In India, momo is available everywhere and everybody loves it. Vegetable and paneer momo especially among Vegetarians. It’s true, the momo from Tibet has come a long away. Luckily for me, Dehradun has some of the most authentic Tibetian markets and colonies due to its proximity to Dharmasala and the Chinese border.
Yes,the Tibetian market here was just like the one in Delhi. They sell useful things such as jackets, bags, rucksacks, gadgets etc.
Enroute Srahastradhara, another popular tourist spot, is a local Tibetian colony. Upon arriving, I entered the narrow lane and followed my nose into Bathang. Here, for the first time in my life, like so many more during my journey, I sat and discussed Tibetian food with a real Tibetian man.
Bathang, the person arrived in Dehradun sometime in 1965. Poor and uprooted, he lead a hard life during his youth. He joined the Indian army and later retreated to his establishment, where we met. He seems happy and content with life in Dehradun. The mountains and the sky don’t seem to wonder where hes from. A semi educated person with an army background, he makes an honest living by cooking and selling the food of his home to expats like himself and others like me.
Speaking of food, Tibetian food is hearty. Its not meant to be gourmet and delicate. Strong flavours and textures dominate its dishes. Goat/ yak’s milk and meat is featured in its robust cuisine. Barley and grain are the favourite sources of carbohydrates. Whatever the land provides is accepted with gratitude.
Out of everything I ate, I shamelessly admit that my favourite were the Indianised MSG momos with chilly chutney.
After experiencing authentic Tibetian fare, I was advised to visit a local cafe by my friend, who shared my passion for momos. The “Mia Casa Cafe” is a home run establishment serving tourist favorites such as pasta, desserts and of course, momo.

This is when I realised 2 things.
1. Staring at me from a plate was, in my opinion, the reward of India’s gambles with acceptance. A Tibetan dish, with western ingredients and presentation styles, sold at an Indian establishment by an Indian chef. Ironically, this cafe is adored by tourists.
2. Deep fried Bacon momo is the best thing I have ever eaten. 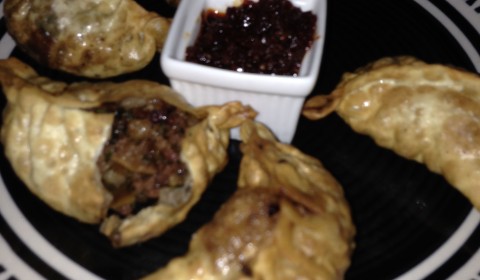